Mary advocated using earthworms to recycle food waste into usable fertilizer. For more than 20 years, she researched, developed, and marketed products related to the earthworm.

In 1982 she self-published Worms Eat My Garbage. By the time she wrote the second edition in 1997 she had sold over 100,000 copies. To date over 200,000 copies have been sold. In 2017 her close friend Joanne Olszewski  authored a 35th Anniversary edition  released by Storey Publishing.

As “Worm Woman,” she introduced thousands of schoolchildren and home gardeners to the fascinating, environmentally-significant activity of vermicomposting. She wanted to change the way the world thought about garbage.

She was an international authority and lecturer on small-scale vermicomposting whose honors included a National Science Foundation grant and the National Recycling Coalition’s Recycler of the Year. Mary, a visionary is remembered as the author of the landmark book about using earthworms to compost food waste.

One Bin at a Time: The Pioneering Mind Behind Worms Eat My Garbage

The Updated Landmark Book on Composting with Worms 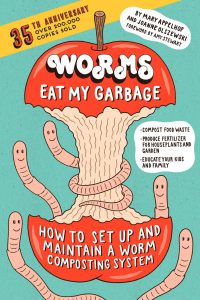